Protest placards are a very expressive way to communicate issues that you feel strongly about. The use of type and image are simple but stand out well creating striking pieces of design. Hand made designs suggests a personal element to show how these issues are effecting real people. Within all of these placards there is a very direct language, this creates a very clear purpose for the placard. It also grabs the audiences attention by standing up to a cause. The consistent pink and red colour scheme suggests femininity as the cause is standing up for women. It the also has connotations of blood and aggression which suggests the context but also the ideology of the placards purpose to take action.

The Free Periods campaign creates a more thought provoking campaign technique. The way the money is rolled into the shape of a tampon suggests the issue of tampon tax. By doing this it communicates the debate of abolishing the tampon tax due to it being a necessity not a luxury item. From my previous research into period poverty one source stated how the average monthly cost for sanitary products are over all £10. It could be argued that the £10 note could be visualising this monthly cost. The pastel pink illustrations of the hands holding the placard is a lot less direct than the photographs of real protest. But these visuals still suggests the same ideology of women standing together to make change.

Let’s talk about period’s is also a thought provoking campaign but has a more bold design style. The purpose for this design by NH1 Design is to encourage people to open up and talk about periods to try and get rid of the stigma which surrounds the topic. Rather than designing sanitary products which are subtle to try and hide the products. It creates more of a celebration to encourage people to not be ashamed of menstruation. The red colour scheme suggests the colour of blood and the modern typeface advocates modern society trying to make a difference with the taboo of periods. 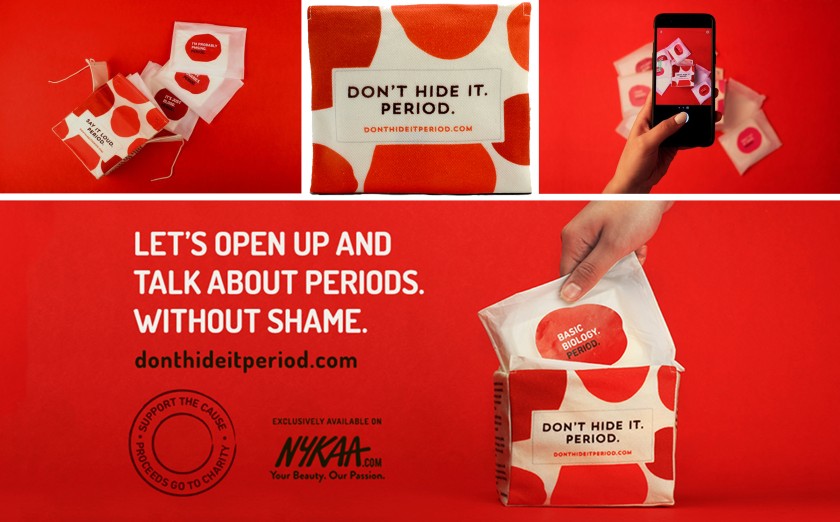 Another way to try and reduce of the stigma surrounding periods is the design idea of Femoji’s. Emoji’s are such widely used form of design which are universally understood by the visuals. This is an important aspect as period poverty is a global issue so would communicate through languages well. Emoji’s are also used by both males and females, this is a way to try and reduce the awkwardness that most males have towards periods. This could also help to make women feel more comfortable, that the symptoms they are suffering with are normal and they are not on their own. There are 1620 emoji’s with such a wide range of expressions, by adding these it would be another way of normalising the topic to become more socially expectable. 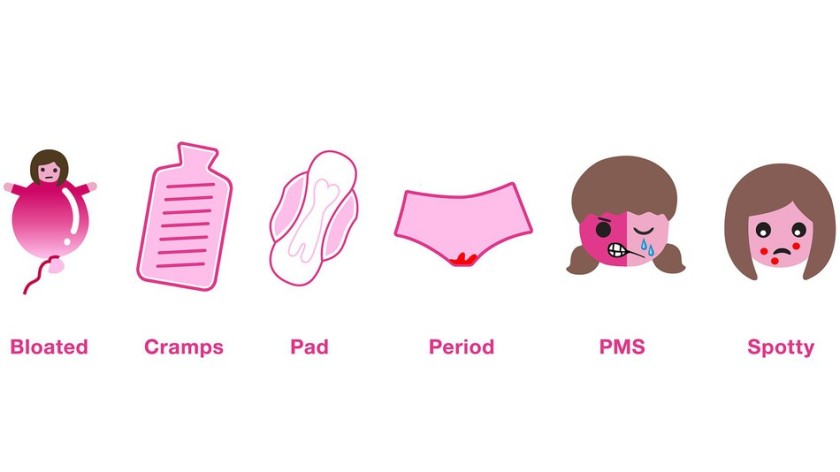 The Period Game is an educational technique of designing to communicate information in a fun and interactive way. A striking design choice is the use of colour, the pink and red has connotation with femininity and periods, as well as having a visual graphic style. By educating children from a young age begins to think of how the next generation could begin to help break the taboo surrounding periods. By them becoming more educated and aware of the period poverty, which could also help to reduce the issue.

The Homeless Period campaign visually communicates the issue of period poverty by the design style choice and use of material. By using a cardboard as a material has connotations with a homeless lifestyle. This is because it’s an easy material to source of the streets, and this is also widely used as a form of housing on the streets. The un designed type using a permanent marker suggests the audience connecting with the homeless person by the use of handwriting. This creates a personal and emotive technique to engage the audience. By using a hashtag The Homeless Period forms a community of people being able to stand together and connect through social media to make a change.

The Bloody Good Period organisation uses a more realistic design technique by the visual  image of blood. This direct form of communication creates shock tactics to remind the audience of what a period is. The type ‘we don’t bleed blue’ gives a link to the mainstream adverts for sanitary products, as they try to desensitise the truth about menstruation. Although, this direct language helps to engage the audience that this is a real issue and it needs to be talked about. The type ‘let my people flow’ anchors the image of the flowing flood creating a pun. But also suggests people standing together and making a difference for the people in need. By doing this it suggests a way of taking action and making a change.

This is a text widget. The Text Widget allows you to add text or HTML to your sidebar. You can use a text widget to display text, links, images, HTML, or a combination of these. Edit them in the Widget section of the Customizer.